Swales at The Atlas Kasbah

by Anders Drew on December 7, 2009 in Uncategorized • 0 Comments

Stage 2 of our work at The Atlas Kasbah is now complete, possibly the most important with the rainy season (!?) on us. Still no rain at this point even though we are now approaching mid-December. Anyway, we have completed 116m of Swale, of 1metre depth to top of downhill bank and averaging 1metre depth, thus giving us a total water holding capacity of over 100,000litres – precious resource on a parched landscape where the water previously ran straight off the land. We have half filled all the swales with a mixture of carbboard, paper, goat manure, chicken manure, straw, plant residue, and compost to aid water retention and reduce evaporation in case of rain, as well as providing a rich nutrient base in the swales. The four swales border the two orchards, running from drive to boundary hedge, although we had fun marking out the swale below the citrus orchard as the contour of the land meant a single swale would either cut straight through the orchard or if started lower down the slope, would angle off down through the parking area and mean over 100m of digging. We solved the isssue by constructing three individual swales, of 11m, 3m, and 13m, each one lightly overlapping the bank of the higher and/or lower one. This would mean all the rain water would be collected between the three. It will be interesting to see the rains as there seem to be vastly differing views of how much will fall. We wait with baited breath ready to rush out to the Kasbah at the first sign of raindrops.

The ground above the top two swales is more sloped and already terraced, with Mohammed (s) tidying up all the terrace banks in preparation for mulching. Organic matter has been hard to come by although clippings from garden work at the hotel I am currently staying at has provided over 12 large sacks of plant residue. As we filled swale 2, I decided to use the month old compost we had started as we are due to move the compost bins to a new site. As we emptied the compost bin, I was amazed to find after only one month a rich 3inch bed of compost (black gold) at the bottom, so we will push on with the new compost area and education as soon as possible. We plan to build the compost bays out of old plastic water bottles.

With the lack of OM (organic matter) available I had asked at the Souk where all the vegetable and fruit waste goes and was told that it is bagged for sale as animal feed – could be a valuable source of plant residue to fill a series of bins. My one concern was that all the fruit and vegetables in Morocco are grown using all sorts of chemicals and that this chemical residue would pass onto our organic hectare. I consulted Charles Dowding (see www.charlesdowding.co.uk), an expert of compost and mulching, and whilst he shared my concern (for Morocco as a whole) his response seemed positive….he said –

“Nonetheless, I would be tempted to use the vegetable wastes, especially if your compost heaps get hot, and can be turned once then left another two or three months to allow bacteria to do some more ‘chemical decomposition’. I can’t be sure but my feeling is that a good composting process will neutralise a lot of synthetic residues: for example, in our polluted world, the recent aminopyralid scare is the first example of contamination (that I know of) from herbicides or insecticides that have passed through a composting process.

Obviously I can’t say this for certain, but I do know for sure that we live in a (horribly) imperfect world and have to make the best of what is available. Here, I use non-organic cow manure and mushroom compost – but I check the cow manure first by germinating and growing seeds in it.

As you say, the soil needs lots of organic matter! “……….Charles Dowding

I also discussed grow-through mulch with him as we hope to mulch all the terracing, either as a maintenance mulch to improve the soil for longer term use, or to plant up for winter veg using grow-through mulch as a protective and soil improving base. We noticed that where we have mulched the citrus trees we have several very healthy courgette / squash plants growing, thus creating a living mulch around the tree base, we just need to ensure that they will not compete with the citrus trees.

Our longer term plan is to try and construct a polytunnel out of plastic bottles, possibly use a traditional one in the meantime where we can propegate seeds and thus plant into grow-through mulch beds. Its astounding to see the difference in the soil beneath the mulched fruit trees…..it just smells like forest floors….the most natural thing in the world.

We also will be looking into bringing pigeons onto the land. As Geoff Lawton explains in his Greening The Desert II video – http://permaculture.org.au/2009/11/17/greening-the-desert-ii-video-greening-the-middle-east/
pigeons are a no-input resource which provide an incredibly nutrient rich manure!!…..I guess possibly also food if desired.

Anyway, we hope to mulch up the terraces this week and get planting, as well as planting some nitrogen fixing trees on the banks of the swales, put in some small polytunnels for organic winter mint (massive use of chemicals on mint in Morocco), build a compost system and start a polytunnel….well maybe not all this week, but soon, Insha Allah.

Will update photo gallery with images from The Kasbah. 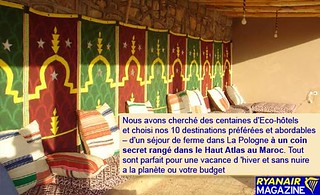